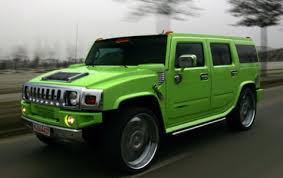 Zonbu’s chairman and CEO are both French transplants to America. They bring with them a somewhat continental outlook and, dare I suggest, sensibility. But is this approach compatible with the prevailing American psyche?

A recent cover story in Fast Company magazine featured a mechanic from Kansas who has been hot-rodding diesel and bio-diesel drivetrains and dropping them in large American SUVs and classic land yachts like 60’s Lincolns and Chevy Impalas, doubling horsepower and fuel economy. In fact, the Governator recently had one of his vehicles delivered to Kansas for some eco-magination. What does this have to do with the Zonbu? Lots…

The mechanic, Johnathan Goodwin, got started when he bought an earlier civilian Hummer and decided that in its stock form it was “A piece of junk”. But that only served as inspiration and Goodwin set about correcting the short comings he saw in the Hummer.

“Goodwin installed the Duramax and a five-speed Allison–the required transmission for a Duramax, which also helps give it race-car-like control and a rapid take off. After five days’ worth of work, the Hummer was getting about 18 mpg–double the factory 9 mpg–and twice the original horsepower. He drove it over to a local restaurant and mooched some discarded oil from its deep fryer, strained the oil through a pair of jeans, and poured it into the engine. It ran perfectly”

Another great quote from the article that sums up a prevailing desire when it comes to average middle America and fuel economy:

I’ve written in the past on the potential niche of the Zonbu in American computing culture. I don’t think the Zonbu will become a full desktop replacement for a large portion of the American market, but I do think it can become the device consumers use for 60%, 70% maybe even 80% of their daily tasks. That was my theory when I started this blog and ordered a Zonbu and I’m pleased to say I rarely use my desktop PC except for gaming and video conferencing.

With my Zonbu, I’ve saved a lot on power bills and I’ve enjoyed the quiet computing. But my PC is still here on the floor, in fact I recently did a major upgrade to a Quad Core system and a 22″ monitor. Go figure. My PC won’t go away entirely any time soon, I still enjoy the raw power and indulging in tasks that justify it.

The Greening of Technology, Size Matters

To succeed in the greening of the technology space, companies need to understand and respect that Americans like the BBFS stronger approach. The Zonbu occupies a nice niche at the small, quiet, efficient end of the scale. That happens to appeal to me personally, but it is fascinating to note that despite its diminutive component size on the inside, the Walmart gOS PC comes in a larger than necessary case. “Because Walmart customers equate size and value.” It’s not just Walmart customers.

In that same vein, as much as I love what the Zonbu promises, I think it is dangerously close to the very bottom of the horsepower range on a “go forward” basis. That is to say, while the computing power gets the job done today, I worry about how it will cope with the Web of 2008 and 2009 and the blossoming of on-line video and advanced on-line services. That being said, I think the Zonbu OS itself is extremely well positioned to become a serious player in the desktop Linux space.

To truly excel in the domestic US market I think the French sensibility needs a shot of good old American Bigger, Better, Faster, Stronger.

There is a balance between high performance and green computing, but I’m not convinced the 1.2 GHz Via processor in the Zonbu is striking the right balance. I’m anxious to see what hardware promise Zonbu 2.0 holds.

You can read more of the fascinating story on Goodwin over at Fast Company: http://www.fastcompany.com/magazine/120/motorhead-messiah.html

This entry was posted on Monday, November 19th, 2007 at 2:36 pm and is filed under Business Model, Green Technology, Performance, Product Management, Zonbu. You can follow any responses to this entry through the RSS 2.0 feed. You can leave a response, or trackback from your own site.

5 Responses to American Enviromentalism – Keep the Hummer, double the power and fuel economy